Over the past several years autonomous vehicle technology has been undergoing significant advancements. With commercial applications becoming increasingly more viable, most automotive manufacturers have products on the horizon that target the autonomous vehicle space. Peterbilt Motors is no exception.

In 2014, Peterbilt partnered with Nuvation Engineering to produce an autonomous vehicle demonstration for the 2014 ITS World Congress in Detroit. The demonstration involved retrofitting a Peterbilt Model 579 tractor with an auto-pilot that would control the truck’s braking, steering, and acceleration in order to drive a waypoint-based route.

With only two months remaining before the show Peterbilt asked Nuvation Engineering to integrate our autonomous vehicle IP into one of their trucks to meet their deadline. Nuvation has been working on autonomous vehicle technologies for several years and we were confident we could automate a Peterbilt truck in 8 weeks – and we did! 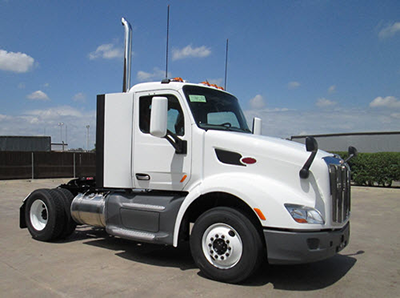 One of the biggest challenges was tuning the auto-pilot control systems responsible for vehicle braking, steering, and acceleration. Anyone familiar with controller design will understand challenges such as finding the optimal tradeoffs between the control rise time, overshoot and stability. Now translate these control parameters to the dynamics of a multi-ton vehicle … an unstable control system can be quite exciting. It can also be very unnerving to sit inside a vehicle, especially one of this size, as it speeds towards a turn and wonder if the auto-pilot is going to do the right thing. Luckily we managed to avoid any incidents or run-ins with the authorities; as fun as it was, the “unstable controller” defense would be unlikely to stand up in court.

In the end, and despite all challenges, the Peterbilt auto-pilot demonstration made it to the ITS show in time and ended up being a huge hit with the visitors. As a demonstration of system accuracy, Peterbilt set up a water-filled soda bottle behind the vehicle wheel before setting it off on a round-trip circuit. The truck would complete the route and run over the bottle each time to great cheer from a crowd of spectators. Another great project and success story for Nuvation Engineering and our customers.