Next Generation FPGAs Address Demands of the Zettabyte Era

Global IP traffic has been significantly increasing over the last few years and is anticipated to continue to increase into the future.  Here are a few highlights from Cisco’s VNI June 2016 report.i

These trends point to the need for significant improvements in the Information and Communications Technology (ICT) sector infrastructure in order to support the demand for IP traffic.  The trend towards mobile devices and increases in broadband speeds will require performance improvements throughout the ICT infrastructure.  These market demands require faster high-speed serial interfaces to transfer data between nodes as well as faster and deeper memory interfaces for data buffering.  Furthermore, these performance increases must occur without increasing power consumption.  Today’s next-gen FPGA devices have risen to these challenges.

The performance of today’s next-gen FPGAs is significantly higher than previous generation devices, opening up opportunities for higher bandwidth and newer protocols. 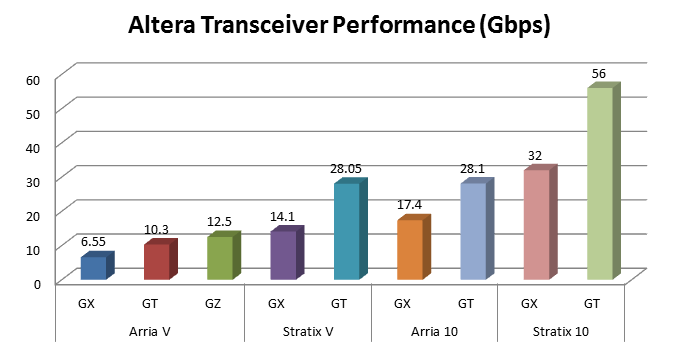 The increase in bandwidth coupled with an increase in the number of transceivers means that the next generation of FPGAs can provide an unprecedented level of total effective serial bandwidth. 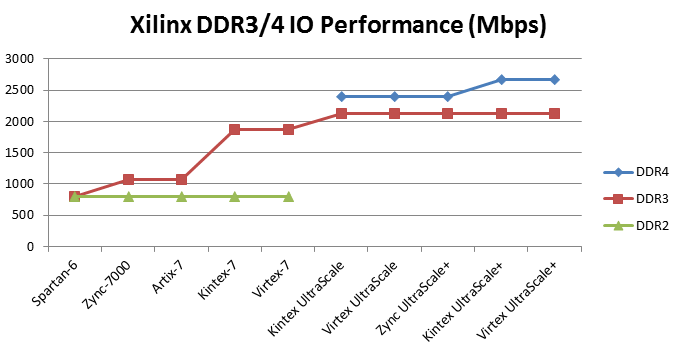 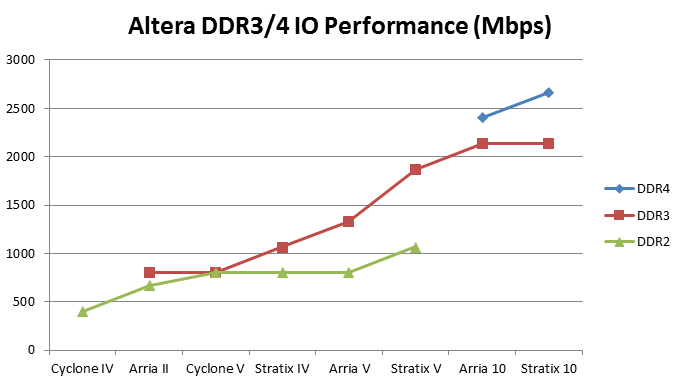 The next generation FPGAs have added support for the higher bandwidth DDR4 memory, along with IO changes to more efficiently pack DDR3/4 interfaces, and support for hybrid memory cubes, in order to provide significant increases in memory interfacing bandwidth and memory storage capacity.

For example, the Stratix V and Arria 10 can support up to four x72 DDR interfaces while the Stratix 10 can support up to six x72 DDR interfaces.  This results in a total DDR bandwidth of 1.382 Tbps for Stratix 10 as compared to 0.537 Tbps for Stratix V.  This over 2x improvement in DDR total bandwidth means more than two times the IP traffic, video frames, etc. can be handled by a single Stratix 10 device.vi

ICT infrastructure often requires that newer equipment is compatible with the exiting form factor.  This means that the new equipment must also operate with similar power as the existing equipment.  Maintaining similar power consumption while increasing serial interfacing and memory bandwidth performance improvements is a significant challenge.  The next generation of FPGAs have made significant efforts to reduce static power, dynamic power, I/O power and transceiver power.

Static and dynamic power have been reduced with smaller process geometries along with material selections and gate construction.  Binning is also used to use a lower core voltage to obtain lower static and dynamic power with a slight reduction in performance.  Architecture changes in device resources, including internal memory, PLLs, clocking networks, and DSP blocks have also resulted in lower power.  IO power has been reduced by supporting the lower voltage DDR4 Pseudo Open Drain standardvii as compared with the DDR3 SSTL standard.  IOB low power mode and automatic disabling of input termination also result in IO power reductions.  Transceivers have also been redesigned for power reduction. In addition to the device power improvements, vendor tools improvements have also been made to optimize power usage and take advantage of the device power improvements.

In summary, the next generation of FPGAs have made significant improvement in transceiver performance, memory interface performance and power usage in order to support the market demand of the zettabyte era.

i Cisco, The Zettabyte Era: Trends and Analysis

vi Altera, Meeting the Performance and Power Imperative of the Zettabyte Era with Generation 10

FPGAs and HMC Devices: What You Need to Know