A client in the medical device design industry asked Nuvation Engineering to perform a design review of their system for a multi-PCBA dialysis machine. Their existing system architecture suffered from poor manufacturability and reliability due to a multitude of custom cables connecting to each PCBA, and lack of a standard PCBA form factor. Due to the complexity of the cable harnessing, it would take a skilled technician several days to assemble a single machine. Nuvation Engineering proposed re-designing the system to a modular architecture, with the PCBAs reformatted to the VMEbus (Eurocard 6U-160) standard. These modular PCBAs then slide into a card cage and mate with a custom-designed backplane, which serves as an electrical interconnect matrix and connection hub for external devices (motors, sensors, etc.). All backplane connections to external devices are then made using off-the-shelf, highly reliable IDC ribbon cable.

Nuvation Engineering’s proposal resulted in the elimination of most of the custom cables in the instrument, as well as greatly reduced assembly time, increased reliability, and improved EMI and thermal performance. Once the proposal was accepted by the client, Nuvation assisted the client in re-designing all their PCBAs to the new Eurocard 6U-160 form factor. Nuvation also performed the design of the highly complex backplane. This dialysis machine is now in volume production and shipping to clinics around the country, making dialysis simpler and more personalized for patients and healthcare providers. 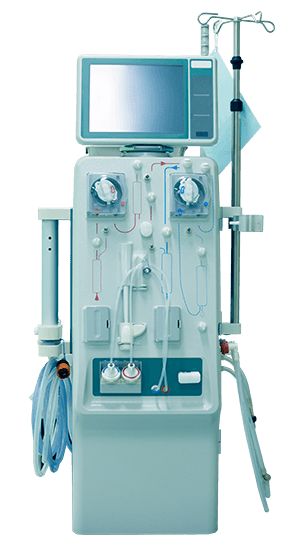