As we mentioned previously, Nuvation Engineering has signed a 4-year research and development agreement with researchers from the University of Waterloo. The research will be conducted by the Waterloo Autonomous Vehicle Laboratory (WAVELab), which was founded in 2009 to spearhead research in perception, planning, and coordination of autonomous vehicles. 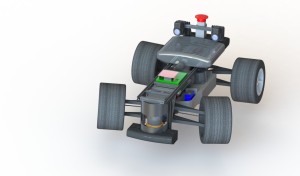 Nuvation Engineering’s research team will be led by the WAVELab Director, Prof. Steven Waslander, and includes Profs. William Melek, Baris Fidan, Jan Huissoon and Soo Jeon. There are also four graduate students to date, with two more slated to join in the new year. Their goal with the WAVELab is to develop new high-speed algorithms that use a variety of sensors to map and navigate through the environment, and ultimately create the next generation of reliable, autonomous robotic vehicles. Algorithmic limitations and solutions they’ll be working on include:

The first phase of the research will involve the development and testing of a single vehicle testbed. The testbed will be a safe and convenient way to test multiple vehicles with different driving, sensor, and computational capabilities, while being sufficiently complex to be representative of real driving and performance scenarios.

The WAVELab previously collaborated with the University of Waterloo Autonomous Racing Team to develop an autonomous robot. The platform consisted of an RC car chassis, IMU, GPS, laser scanner, and camera, with obstacle mapping and path planning algorithms running on-board for autonomous navigation. The team will be able to leverage this research in future autonomous vehicle designs.

Nuvation’s engineering staff is recognized globally for its advanced technical expertise. Contact Nuvation to learn more about the electronic design services we provide, and the 800 successful projects we’ve delivered.