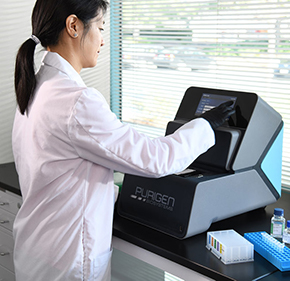 Genomic analysis involves examining the sequence of DNA nucleotides contained in the cells of a living organism. One of the first steps in genomic analysis is to obtain a pure and concentrated DNA sample from the cells or tissue sample under study. The cells must be broken apart and the DNA must be separated from the cellular debris in the sample. Conventional techniques for doing this involve a sequence of chemical processing steps which are labor intensive, time consuming and error prone. Purigen Biosystems has found a better way.

Standard DNA extraction and purification workflows rely on binding the DNA to a solid support (such as ferrous beads or silica particles), washing away the unwanted debris, and then releasing the DNA from the solid support (elution). Some techniques also involve the use of centrifuges or vacuum. These workflows require precision in sample mixing, handling, and transfer tasks which are complicated and error prone and require the involvement of skilled technicians. In some cases, these techniques may result in DNA with sub-optimal purity.

Purigen Biosystems contracted Nuvation Engineering to assist in the development of an instrument that separates and concentrates DNA solely by its ionic mobility (i.e. charge). This technique used by the instrument is called Isotachophoresis (ITP). DNA strands have a negative charge due to the phosphate groups on each nucleotide. In ITP, a fluid sample containing DNA is placed in a microfluidic channel along with two special electrolyte solutions. The ionic mobility of the DNA is in between that of the two electrolyte solutions. When an electric field is applied across the channel, the DNA and electrolytes migrate towards the positive terminal at different rates. The DNA concentrates at the interface between the two electrolyte solutions. Unwanted cell fragments and impurities migrate away from the concentration of DNA. The result is high quality, isolated, and purified DNA. The ITP process is illustrated in Figure 1.

To support the ITP process that occurs on the instrument, Nuvation Engineering developed a high-voltage board that includes a variable 0-1.5 kV power supply as well as a robust set of safety monitoring and interlock circuits. Additionally, the ITP process requires the delivery of constant electrical currents to each microfluidic channel. The applied currents range from uA to mA across the 1.5 kV compliance range. Nuvation designed precision current source and sink circuits to deliver the requisite currents at these high voltages. To avoid leakage currents and electrical breakdown, the high-voltage board required careful consideration of creepage and clearance distances, PCB substrate material, layer stack thicknesses, and the use of slots in the PCB. A conformal coating material with a high dielectric strength was also applied to the final printed circuit board assembly (PCBA).

In addition to the high-voltage board, Nuvation developed four additional custom PCBAs for the instrument. The main PCBA is a densely populated board with an ARM processor, embedded single board computer (SBC), multiple DC/DC supplies and peripheral circuits. The remaining three boards perform specialized sensing, actuation, and data acquisition functions.

The Purigen instrument makes use of a wide variety of sensors and actuators, including:

Nuvation also worked closely with Purigen to develop a clean and intuitive graphical user interface (GUI) for the color LCD capacitive touchscreen of the instrument.

The software architecture is split into layers. At the top layer is the graphical user interface (GUI) that scientists and technicians use to control the device. The layer below contains the business logic for controlling the ITP process. At the bottom layer is firmware running on the two ARM processors that control the hardware devices in the instrument. The bottom layer of firmware is designed to execute in a “hard real-time” manner, i.e. it will consistently respond in less than 1ms to events occurring on the instrument. The middle layer software is more complex and also less time-critical and is therefore allowed to run with greater latency.

Because the middle layer and GUI code do not need hard real-time performance, Nuvation’s engineers collaborated with Purigen’s engineers to implement critical communication and data capture interfaces using Python in a Linux framework, which reduced the software development cost and effort.

The low-level firmware also manages safety on the system. This firmware will put the instrument into a “safe mode” when it is not in use or if a problem is detected with the higher-level code. Safe mode prevents harm to the operators and ensures that the instrument is not damaged.

"Nuvation Engineering was a trusted extension of Purigen’s engineering team throughout this project,” said Klint Rose at Purigen Biosystems. “They applied an impressive amount of varied technical expertise to solve many challenges in the design of our instrument.”
- Klint Rose, Purigen Biosystems

A sophisticated logging system tracks everything happening on the instrument. This allows Purigen to track the performance across each run. In development mode, all of the logged data can be uploaded automatically to a central server for analysis. Because there are multiple configurations for the instrument, Nuvation Engineering implemented a versioning system that allows the software/firmware to automatically adapt its behavior based on the version detected. This allows Purigen to configure instruments for specific needs without having to manage multiple different builds of the software and firmware.

After the instrument design was completed, Purigen entrusted Nuvation with engineering supervision of UL, EMC and ESD regulatory compliance testing, as well as hardware and software testing to ensure the product met functional and safety requirements. Nuvation Engineering oversaw compliance testing to the following standards, while debugging and solving various issues throughout the process:

Nuvation Engineering supported Purigen and a contract manufacturer (CM) through every stage of the New Product Introduction (NPI) process. NPI activities included test fixture design, test software design, manufacturing process documentation, debugging, supply chain management, and process optimization. Due to the complexity of the instrument, several pre-production runs were required to fine-tune the assembly and testing sequence. Nuvation worked with Purigen and the CM to provide creative solutions to various challenges that appeared on the manufacturing line. From initial design concept, through hardware, software/firmware design, compliance testing, and manufacturing support, Nuvation partnered with Purigen to create a ground-breaking instrument that redefines DNA purification.